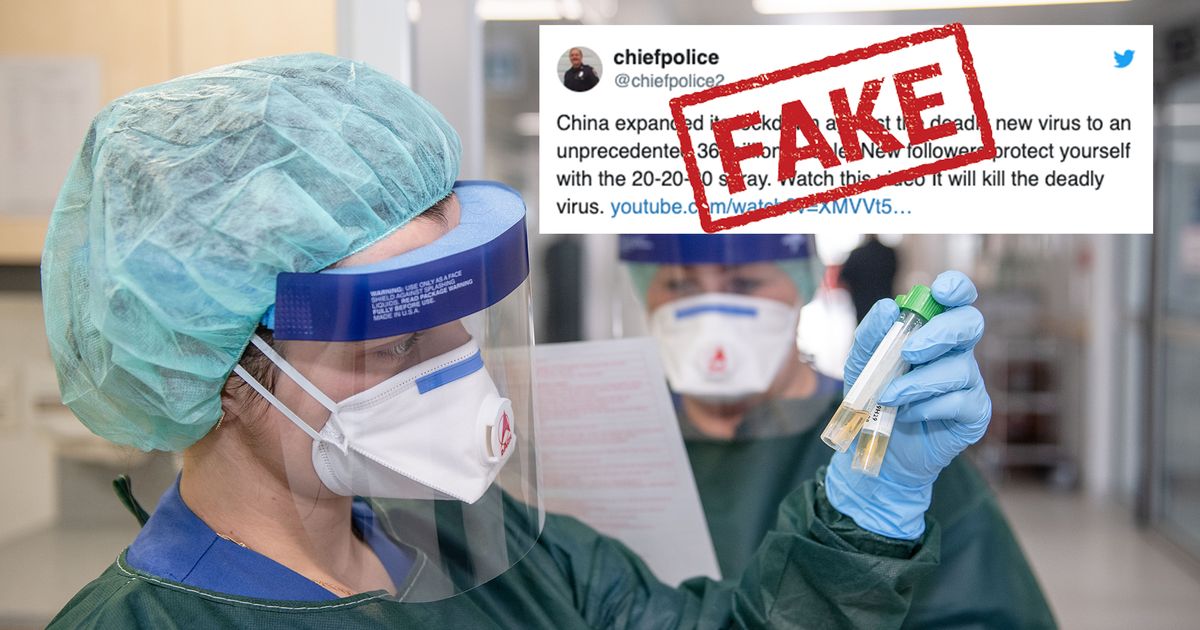 The deadly coronavirus has spawned dangerous, baffling conspiracy theories online as officials across the globe work to stop the virus' spread.

As of Thursday afternoon, there had been more than 7,700 confirmed cases of the virus — which originated in Wuhan, China — and at least 170 deaths. Eighteen other countries, including the U.S., have confirmed cases, according to the World Health Organization.

But as bad as the virus is, conspiracy theories and misinformation are making the situation worse. The internet is rife with misinformation — some if it dangerous, some strange, some downright racist — seemingly designed to piggyback off the intense interest in the virus. There has been so much bad information out there that Twitter has started tweaking search results to filter out non-credible coronavirus content and Google has launched "SOS Alert" to provide reliable resources for people searching for information about the virus.

Here are some of the most prominent hoaxes currently being spread across social media and resources debunking them.

The thrust of this theory is that the coronavirus is somehow owned by Bill Gates and was unleashed for nefarious purposes. One Twitter post, for instance, racked up 1,000 retweets by linking out to a strange website running a headline claiming the coronavirus was "a patented virus" and that the Bill & Melinda Gates Foundation was "one of the primary owners." The tweet then pivoted to wondering if the "deep state" spread the virus "to create chaos since nothing [is] stopping Trump."

A similar conspiracy theory floated around TikTok last week, according to Forbes. But the Gates Foundation did not, of course, create a virus that the so-called deep state then used to infect an unsuspecting population.

As is often the case, there is a kernel of truth somewhere that was distorted well past the realm of reality. In this instance, the Gates Foundation helped fund the UK's Pirbright Institute, which holds a patent related to the development of a weakened strain of the coronavirus that could be used to vaccinate birds or other animals from respiratory diseases.

"Pirbright does not currently work with human coronaviruses," the institute said in a statement.

Additionally, The Gates Foundation foundation announced on Sunday that it would donate $10 million to fight the outbreak.

As the Daily Beast reported, QAnon folks — a wholly false, yet incredibly popular conspiracy theory that claims President Donald Trump is dismantling a secret, vast deep-state cabal — have been promoting the use of "Miracle Mineral Solution" (MMS) to protect yourself against the coronavirus.

“I’m going to have to get home, and MMS the whole state,” QAnon promoter Jordan Sather said in a recent video, according to the Daily Beast. “MMS the whole shit out of everything.”

The thing is, MMS is basically bleach.

"Miracle Mineral Solution and similar products are not FDA-approved, and ingesting these products is the same as drinking bleach," the FDA said in an August statement.

China expanded its lockdown against the deadly new virus to an unprecedented 36 million people. New followers protect yourself with the 20-20-20 spray. Watch this video It will kill the deadly virus. https://t.co/cWfMQZHoY5

One U.S. nonprofit has apparently raised a fair bit of money for charity, in part, by posting sensationalistic Instagram posts about the coronavirus. NBC News reported the two most popular coronavirus Instagram posts were both from Karmagawa, a nonprofit that says it donates proceeds of its merchandise to charity.

"Both posts feature a carousel of videos, some of which show people eating animals like bats and mice and put the blame for the outbreak on the eating habits of Asian people — claims that have been debunked," wrote NBC News.

Experts have warned these sorts of posts could help spread racist and xenophobic fears tied to the illness. The popular posts from Karmagawa, which has 1 million followers, have racked up tens of millions of views and hundreds of thousands of likes.

As Mashable's Caitlin Welsh reported, there's an error-riddled social media post going viral that espouses racist conspiracy theories about the coronavirus. The misspelling-filled post falsely connects some Asian foods to the spread of the disease and has been particularly popular in Australia, even after it's been repeatedly debunked.

1/2 @NSWHealth has been made aware of a social media post that is being widely circulated warning people to not consume certain foods or visit certain locations in Sydney.

This post has not originated from NSW Health or any related entity... pic.twitter.com/GcvM4aG4ga

Sans evidence, the theory posits that a Chinese scientist who was escorted out of the lab last summer sent the coronavirus back to China.

“This is misinformation and there is no factual basis for claims being made on social media,” The Public Health Agency of Canada told the National Post.

THREAD: Some of my stories about Canada’s National Microbiology Lab (NML) have been distorted to create a #coronavirus conspiracy theory. One of the 1st mentions was Saturday on Twitter. Businessman Kyle Bass claimed this involved “a husband and wife Chinese spy team”: (1/11) pic.twitter.com/GfcnlBJ9Fp

A common thread for a number of conspiracy theories out there is that the Chinese government developed the virus as a weapon. As Poynter Institute fact-checking site Politifact noted, one such theory floated the idea that the aforementioned scientist in the Canadian lab took the coronavirus to a maximum security lab in Wuhan, where it eventually hit the public.

But Politifact said there just wasn't proof to back that up, "Officials are still trying to determine the exact cause of the outbreak, but there’s no evidence of it being created for use as a bioweapon."

Debunked theories like these are a reminder that while the outbreak is concerning, you should still be careful about what you share and what you accept as fact. The coronavirus has the attention of the world, which all but guarantees people peddling disinformation will ride that wave.

This is a developing story...

HTC's Exodus 5G router can be a Bitcoin node

Tech is overwhelming us. So Pantone is using Classic Blue...

I regret to inform you Spotify turned my cat onto vaporwave...

Scrapped Shining Prequel Would Have Answered A Long-Standing...

So they gave me a copy of that prologue, and there are little vignettes from every...

‘Rescuer too needs rescue… victims from drowning, we from...

The friend would continue to press for answers saying, “Whitney, truth or dare,...

The Realme Blog: Changed of plans