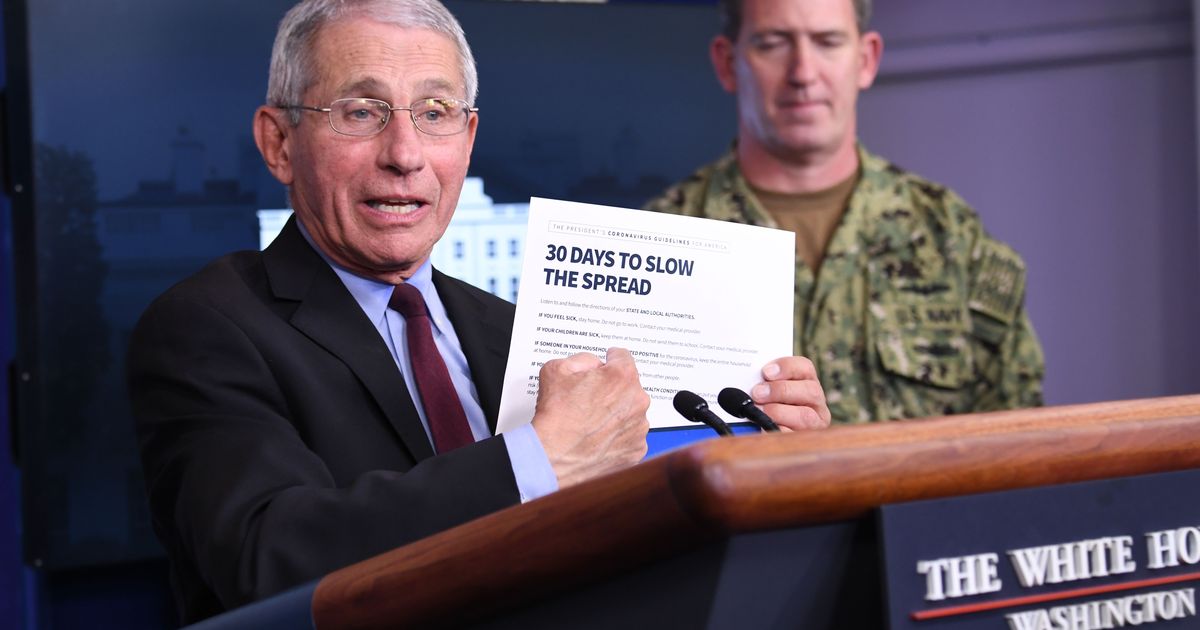 The man America looks to for trusted information right now, Dr. Anthony Fauci, is reserving judgment on Google and Apple's joint gambit to help slow the spread of coronavirus with a contact tracing app.

On the Snapchat show Good Luck America, host Peter Hamby interviewed Fauci, who is the director of the National Institute of Allergy and Infectious Diseases and the face of America's coronavirus response.

The grandfatherly pro weighed in on a range of coronavirus-related topics, such as the viability of a 2020 baseball season, and the false conspiracy theory that 5G impacts our immune systems ("That’s thoroughly preposterous, untrue, and actually ridiculous." God bless, Dr. F).

One issue on which Fauci expressed (albeit tempered) wariness was "contact tracing" apps. Google and Apple recently announced a joint effort to roll out a bluetooth-based system that would allow government health agencies to track the people with whom a person has come in contact. The theory is that contact tracing is one way to identify who might have become infected with coronavirus early, stopping the spread of the disease before it gets too far.

When Hamby asked Fauci for his take on Google and Apple's work, he equivocated. While he supported the idea from a public health standpoint, Fauci also cited potential concerns about "civil liberties" (presumably privacy):

I haven’t personally consulted with them. But one of the sticky, sticky issues about that is that there is a lot of pushback in this country to get someone or some organization—particular if it’s sponsored by the federal government, I think they’d feel better about it if it’s private—to have by GPS somebody know where you were and when you were there. Even though from a purely public health standpoint, that makes sense. You know, you could look at somebody’s cell phone, and say, “You were next to these 25 people over the last 24 hours.” Boy, I gotta tell you the civil liberties-type pushback on that would be considerable. Even though from a pure public health standpoint, it absolutely makes sense.

Fauci is right. Civil liberties groups, such as the Electronic Frontier Foundation (EFF), are already pushing back on contact tracing apps. They write that the granularity of the apps has not been proven as an effective method to stop the spread, and, moreover, that technology is not an effective replacement for public policy and health infrastructure.

"We cannot solve a pandemic by coding the perfect app," the EFF writes. "Hard societal problems are not solved by magical technology, among other reasons because not everyone will have access to the necessary smartphones and infrastructure to make this work."

Contact tracing apps might be designed to track users for the purpose of health, but they also enable more surveillance of our movements and the people with whom we come in contact. The EFF argues that a decision weighing this tradeoff should not be weighed lightly.

"COVID-19 is a worldwide crisis, one which threatens to kill millions and upend society, but history has shown that exceptions to civil liberties protections made in a time of crisis often persist much longer than the crisis itself," EFF writes.

Fauci, it seems, may agree. When Hamby asked Fauci about whether civil liberty compromises were a natural part of crisis response, Fauci referenced a quotation by Benjamin Franklin:

"Do you give up a little liberty to get a little protection? I mean, I just read in the Washington Post this morning, it was Benjamin Franklin, I think. He says, 'If you give up some liberty for some protection, you are neither free nor protected.'"

Where do you stand?

We are all Brie Larson, who cannot stop talking about 'Animal...

This vintage camera is actually an instant camera &#8212;...

A British grocery chain is taunting the Beyhive about Ivy...

Stair-climbing robot snake is almost as agile as the IRL...