I came out to have a good time and I'm honestly feeling so attacked right now. Image: carrion By Amanda Yeo2020-03-02 15:58:52 UTC Devolver Digital has a reputation for promoting smaller, less conventional indie games such as Hotline Miami,... 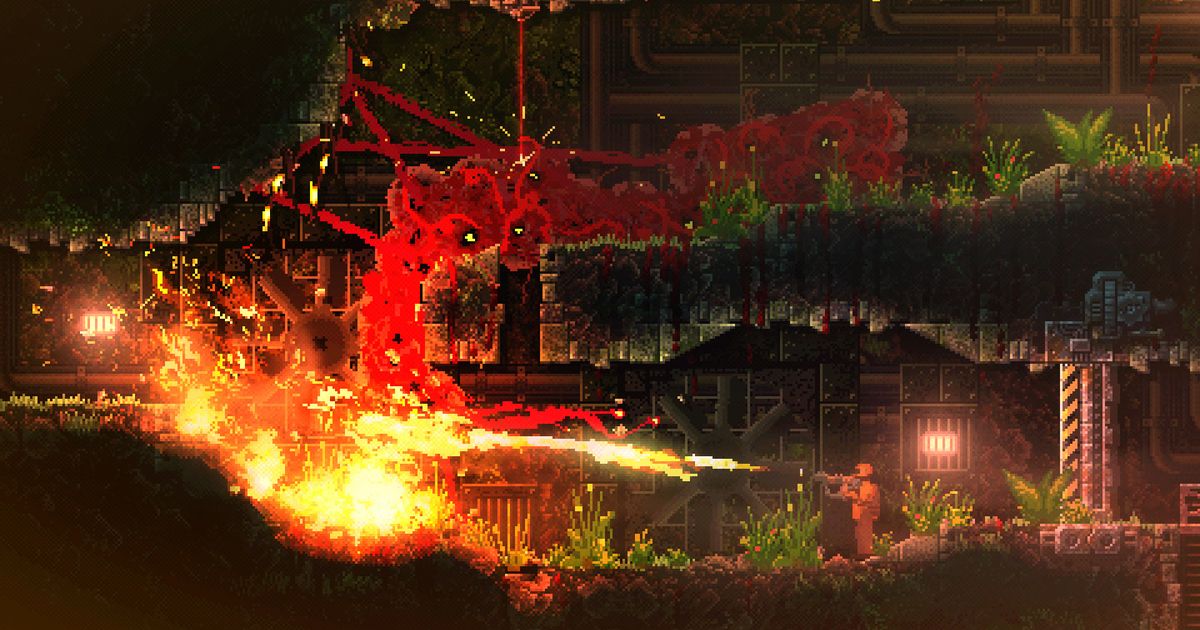 Devolver Digital has a reputation for promoting smaller, less conventional indie games such as Hotline Miami, Genital Jousting, and The Talos Principle. This weekend at PAX East, the indie game publisher showed off some upcoming additions to its catalogue, including horror title Carrion and two newly announced games: open-world Sludge Life and roguelike Disc Room.

Mashable got the opportunity to play through demos for all three games last week, and on first impression it was a rather mixed bag. Devolver Digital's strength is that it isn't afraid to get weird, which can result in some fantastically fresh games. But at least one title in the new cohort was a bit too experimental for the common palate.

Sludge Life was, unfortunately, rather dull. Coming to Nintendo Switch and the Epic Games store in spring, the game has you leisurely stroll through an open world and tag walls at predetermined locations. And, from what I saw in the demo, that’s pretty much it.

There are a few characters dotted around to spout silly lines at you, but overall Sludge Life felt meaningless, more style than substance. There was no real incentive to keep going, not even a compelling story or intriguing world, and I was very quickly bored. The retro CRT television graphics were novel, though.

The game that surprised me most was Disc Room, also arriving in spring. I don’t consider myself much of an aficionado for roguelikes, as I find losing all my progress after dying more frustrating than challenging. However, rather than setting you back to the beginning, Disc Room’s deaths are essential to progress.

Set in 2089, you are a scientist sent to investigate a giant disc orbiting Jupiter. Unfortunately for you and your limbs, said disc is a maze of rooms filled with moving, spinning saw blades. Players dodge the blades for as long as possible, with doors to new rooms opening once certain challenges have been met. These range from surviving for over 10 seconds to dying to four different types of blades, but you always have to die.

Disc Room was challenging enough that I kept trying again, hoping to last long enough to throw myself into that one particular blade. Getting the ability to dash made temporary survival a little easier as the difficulty increased, but it didn’t negate the need for careful timing and precision.

I am curious to know if Disc Room explores more of the plot outside the opening scenes. It would be interesting if the player’s many, many deaths built into some probably horrific narrative.

I was most excited to demo Carrion, a “reverse horror” game where you play as a monster trying to escape a secret lab. Though it could be argued the real monsters here are the humans, who imprisoned and conducted experiments on you when you were probably just minding your own eldritch business. I rather sympathized with the terrifying meat blob, which made chowing down on my captors all the more delicious.

While Disc Room requires precision, Carrion’s gameplay is more wild and messy, as one would expect from a tentacled abomination. Squelching through tunnels and underground passages, players use their flailing ropey appendages to pull levers and remove obstacles in their bid for freedom. They can also grab people and bash them against the walls, consuming them for health and vengeance.

Carrion isn’t all unlimited power. Some humans have guns, flamethrowers, or armor, and there are motion-activated turrets to contend with as well. Fortunately players acquire power ups to help them deal with these complications. I quite liked one which allowed me to dash into wooden barriers to break them, which I also used to fling my writhing bulk into crowds of hapless humans.

I do wish the computer-controlled humans offered a bit more of a challenge, as they aren’t the most sophisticated. Terrified people will run back and forth in futile circles until you grab them for lunch, and the rote screams don’t quite deliver the vicious delight they should. Still, I enjoyed being a chaotic murder death ball. Who wouldn't?

Carrion is due for release on Xbox One and PC this year. I sincerely hope Carrie gets home to the monster wife I just now decided they have.

Get this Samsung VR headset on sale before 'Half-Life:...

This Photoshop masterclass is completely free with this...