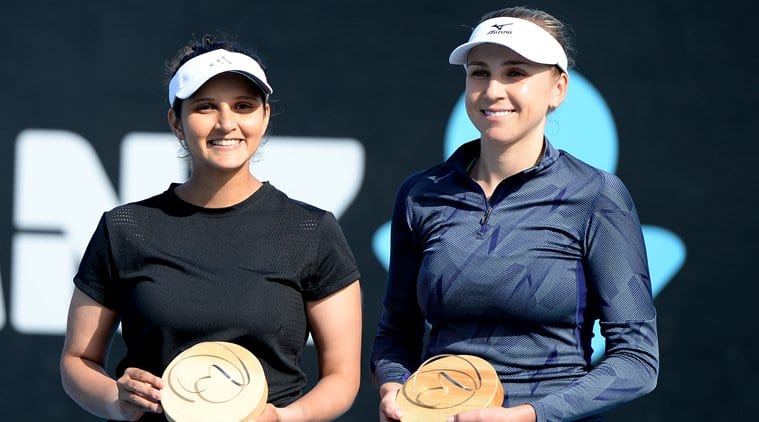 The last time Sania Mirza stepped on court for a competitive match — in October 2017 — the tennis world was ‘different’. Two-time Grand Slam champion Naomi Osaka was then ranked 62nd in the world, Stefanos Tsitsipas, the current men’s world no 6 had not broken into the top 100, and Andy Murray – who has been contemplating retirement of late, was still the world no 3. Mirza too felt the change when she came back to the tour earlier this week.

“The first practice we were hitting in,” says Nadiia Kichenok, Mirza new doubles partner, in a press conference, “she’s asking me, ‘I heard that tennis has changed.’ But she was unbelievable (in training). It’s like she hasn’t missed a thing. She’s still at that level.”
The Ukrainian refers to Mirza’s ripping forehands, her court-craft and the experience of winning six Grand Slam titles — all of which remain dominant in her return to the sport after a two-year hiatus. And on Saturday, Mirza marked that comeback with a title in her first event after a maternity break. Mirza-Kichenok scored a 6-4, 6-4 win over Chinese pair Peng Shuai and Zhang Shuai in the final of the Hobart International to earn the Indian her 42nd doubles title.

“It means everything,” Mirza says after the match. “I honestly thought I’d be rustier than I am. Luckily I was not as rusty as I thought, but I do think I can improve on some things. But that’s me, even after winning a Grand Slam I’m not happy with the way that I played, so I always want to be better. But to do it after (giving birth to) Izhaan is very special to me.”

When the 33-year-old played at the China Open in Beijing in 2017, her last tournament before the break, she had already been ranked No 1 in the world, stayed at the summit for 91 weeks, and had six majors — three in women’s doubles and three mixed doubles — to her name. The need for a knee surgery though first forced her to take time away from the sport, then the decision to start a family. But during that time, there was an underlying promise that there was more for her to achieve. A comeback after such a long gap almost meant she had to make a fresh start. But with a new partner, and especially with a title now under the belt, she’s managed to pick up the pieces very quickly.

“It’s always great to win a tournament, especially under the circumstances, it’s even better,” she says. “Playing for the first time, after almost two and a half years, post a baby, there’s a lot of things (happening). Probably we didn’t expect to win. We both just came in trying to get a feel of each other and our game, get some matches in and of course, we’re really excited to win.”
And in getting the win, the pair have broken the ice well and started the partnership on a strong note, especially with the Australian Open being the next port of call. Especially Mirza, who is probably still at a stage where she is regaining match sharpness, has gained the much-needed confidence with this win.

“I feel that, when I’m returning at my best, I feel very confident,” she says about the way she played in Hobart. “My return is my biggest strength, especially when I’m aggressive with it. That’s when I feel I’m at my best. I do miss some shots, but more often than not I make them.”

It’s with that aggressive playing style that she became a trailblazer for Indian women’s tennis. She was the first, and still is the only Indian woman to break into the top 100 and win a tour event, the only one to reach the top of the world rankings in doubles and win a Grand Slam. And now that she’s back on tour, she’s looking to further inspire others.

“The part of the world that I come from, having a baby is like the end of the world,” she says. “The woman is just supposed to give up and take care of the child. I just feel that even if this inspires one woman to follow your dream and do something that she loves, I feel extremely privileged in this position.”

She now joins the elite club of tennis ‘Super Moms’ who are currently on tour, which includes the likes of Serena Williams, Victoria Azarenka, and very soon, four-time singles Grand Slam champion Kim Clijsters (who won three of her majors after becoming a mother).
The win in Hobart has given Mirza a shot in the arm, but her attention now turns toward the Australian Open. “We will not be seeded, to start with. There will be bigger teams there,” she adds. “Today we played against one of the best teams in the world, so this obviously shows that we are there, that we have the level to compete against them. Hopefully my calf is good and (Kichenok’s) hamstring is good. If we are in one piece, then we are good to go.”

Tennis may be different since 2017, but Mirza is still the same.

Prajnesh Gunnewaran on Saturday sneaked into the Australian Open men’s singles main draw as a lucky loser and may run into world number two Novak Djokovic if he clears the first hurdle. The Indian left-hander had lost the final qualifying round to Latvia’s Ernests Gulbis in straight sets but was fortunate to make the main draw as one of the direct entrants withdrew from the tournament. It will be Prajnesh’s fifth straight appearance in the main draw of a Grand Slam.

Compared To Vikings, Bad Boys For Life Was 'A Dream' For Alexander Ludwig

Everything Amazon CEO Jeff Bezos announced during his trip...

Hacked trailer: Hina Khan becomes a victim of an obsessive...

UPTET final answer key 2019 to release today, how to check

According to the video, this new mode hasn't been hiding since day one and was only...

Stephen King is using 'The Stand' to warn people about...

Stephen King has used a chapter from 'The Stand' to warn people about the importance...

Here’s how you can take care of your acne-prone skin this...