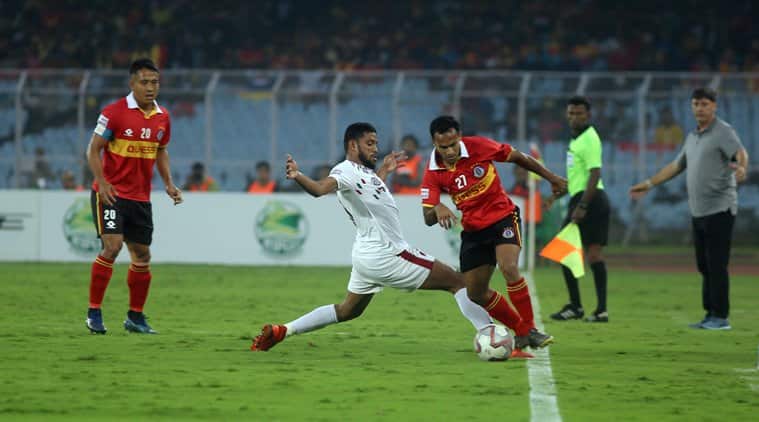 Mohun Bagan consolidated the top spot on the I-League points table with an odd goal in three in the Kolkata derby against arch-rivals East Bengal at the Vivekananda Yuba Bharati Krirangan (VYBK) stadium on Sunday.

The Mariners’ Spanish midfielder Joseba Beitia, who starred with a goal and an assist in the match that finished 2-1, was deservedly declared the Hero of the Match. Mohun Bagan now have 17 points after eight games, taking them six clear of second-placed Punjab FC. East Bengal are sure to lose spots remaining on eight points after seven games.

Bagan named an unchanged eleven for the big game while The Red and Golds made one change, bringing in Mehtab Singh in defence in place of Asheer Akhtar.

The deadlock could not be broken in the first quarter of an hour, however, Bagan did hold the slight edge with their attacking forays.

Then, in the 19th minute, Beitia struck with a professionally-placed header away from the keeper Mawia Ralte, but the Spaniard won’t think twice to owe the goal to dynamic young left-winger Nongdamba Naorem.

The youngster who has been in great form this season had, a few minutes earlier, weaved his way into the opposition box outfoxing Kamalpreet Singh and his cross from close was eventually snuffed out by a sliding Kassim Aidara.

For the opener, the Manipuri latched onto a neatly directed back-pass from outside the box by Papa Diawara and drove ahead. Kamalpreet tried to challenge but Naorem’s sublime skills coupled with his pace meant he was crossing back in from the East Bengal goal line in no time. The cross found Beitia in the clear and he made no mistake.

Bagan dominated the half thereafter and would have gone two up but for Ralte bringing off a super save off a Papa snapshot, from a corner in the dying minutes.

Both sides began unchanged in the second half which did nothing to change fortunes. Bagan continued to have the better of the attacking exchanges resulting in the second goal.

Senegalese and ex La-Liga striker Papa Diawara, who was recruited in the ongoing January transfer window, could not have found a better game to score his first in the famous green and maroon colours, when he rose to direct another perfect header off a Beitia corner, past Ralte and into the back of the East Bengal net.

This finally did seem to spur East Bengal’s attacking instincts and they got one back six minutes later thanks to another new recruit, the freshly loaned Edmund Lalrindika, who was brought in place of Pintu Mahata on in the 58th minute by East Bengal coach Alejandro Menendez.

The 20-year old latched on to a ball in the centre of midfield and surged ahead. Spotting the run of Spaniard Marcos Espada, he unleashed a perfect ball into his path inside the Bagan box. Espada held-off his marker and to his credit brought off a clinical finish, placing his right-footed grounder into the right corner of the Bagan net, beating the outstretched hands of a diving Sankar Roy in goal.

East Bengal pushed relentlessly for the equaliser as Bagan looked tired and almost scripted a memorable comeback when a powerful Juan Mera strike from just outside the Bagan box thundered the crosspiece with Sankar stranded in the middle of the goal.

Mohun Bagan saw off the danger until the end to walk away with three points, and increase the points difference with East Bengal to nine points.

Prince Harry, Meghan Markle no longer ‘Royal Highnesses’: What does it mean

Kerala: Hindu couple ties the knot in a mosque, gets love...

Schools in West Bengal told not to conduct examinations...

Trevor Noah has the perfect compilation album for Trump's...

‘Cricketers are respected only if they perform across formats’:...

[unable to retrieve full-text content]People travel in a crowded bus to return to...

Tesla is serious about producing ventilators to help fight the coronavirus outbreak....