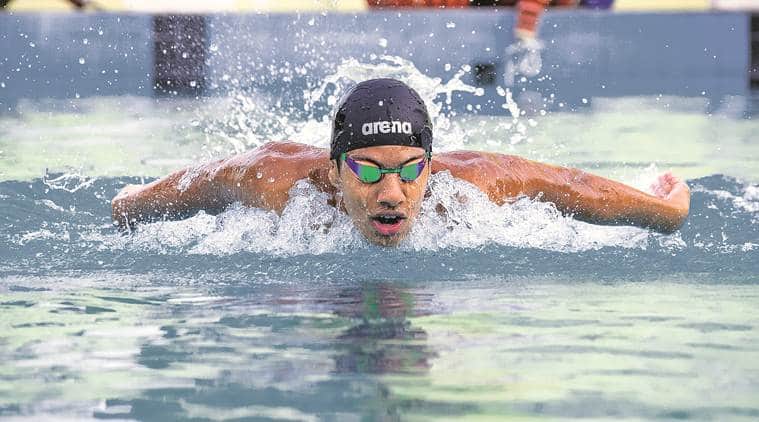 India’s long-distance swimmer and record holder over the 800m freestyle and 400m Individual Medley, Advait Page, was prepared for the extra turns involved when training at the best collegiate facility in the United States: NCAA teams typically train and race over 25 yards (22.86 metres), not the Olympian 50 metres.

What he never anticipated at the start of his term at University of Florida (UF)—arguably boasting the swimming superpower’s best college program in the pool—was the Covid-19 outbreak twist that has brought the world to a standstill.

The 18-year-old landed back home in Indore last week just as the American outbreak was set to rise, cutting short his freshman’s year taking the first direct flight out of Newark into Mumbai, avoiding any European layover.

But the curtailed eight months spent alongside talents like Kieran Smith (500 Yard Freestyle American Record in Feb 2020) and Robert Finke (1650 Yard Freestyle American Record in Feb 2020) who were favourites for selection in the US Swim Team when trials would be held and were expected to set Tokyo on fire later in the summer, gave Page enough of a whiff of what top-class excellence looks and trains like in the pool.

He also has as teammates Trey Freeman, another top distance swimmer and Grant Sanders as well as Jordanian Khader Baqlah – 200 m Freestyle swimmer who may represent his country on the same college program – alongside him in the pool, gym etc.

And then came the first ripples of disruption a month ago when they started getting educated about the dangers of the Coronavirus as training wound up and then heard that the national championship would be cancelled.

“It was difficult and I had to come back because you could not enter the water to train. I’m worried about this enforced break and concerned that these gains of the last 8 months might be lost. But going through this crisis will bond us stronger together,” Advait says as he stays at home through the lockdown like the rest of the world.

Just last August, the challenges of reaching Olympic standards on NCAA’s best swim campus had seemed entirely routine: getting used to ‘short course’ swimming rather than the long course of 50m length laps. Collegiate swimming in his pet event, the1500m, runs over 1650 yards (1508.76 metres) in the 25 yard pool – which translates to 66 laps and 65 turns. Internationally and over the long course, it’s 29 turns.

“So you basically run into walls every 25 yards. I was aware my turns are not strong and now I had to do double the laps. I had to adjust to these speedbreakers and not having the fastest pace,” he recalls of the conundrum over the first few months.

Youngest among even the 10 freshmen at Florida, Advait was aiming high every single day while being tested to go beyond being the biggest fish in the small Indian pond.

“Even making the national championship Division 1 is tough and all other 40 swimmers from your college are close to you in times so it’s a constant push. The first challenge is to make own College team,” he says of being on the South East Conference team. There are racing opportunities every month at local college and YMCA meets. But the summer nationals are the prime event.

“Usually the top swimmers go into a competition tapered (reducing training intensity in days just before the competition), shaved and wearing their best suits only twice a year. Otherwise, we compete untapered, unshaven and in training costumes. It helped me get used to how to devise racing strategies,” Advait says.

The Indore lad would learn about pre-season and the very gruelling mid-season where they put in the hard yards and coming to terms with incremental improvements. “Obviously I’d thought my timings would improve dramatically. But that’s not how training works – it’s geared to peak at the end of the season. So I trained patiently through Christmas and spring and saw the results,” he says.

His downtime is spent with tutors specially assigned to help college athletes catch up with their course. “Our swimming coach insists that we maintain a good grade point average. He values respect, honesty and good grades,” says the sports management Year 1 student.

Swimming with the cream

His coach at University of Florida is 1988 Seoul gold medallist Anthony Nesty, and Advait has some world-class names – all elite swimmers and alumni who train in the same pool but with a different set of coaches.

These include swim royalty Caeleb Dressel, winner of 7 gold medals at 2017 and 2019 World Championships, multiple gold medallist Ryan Lochte – a veteran of 4 Olympics and closest rival of Phelps in 400 & 200 IM, again a strong contender for US team for Olympics as well as Big names True Sweetster and Mitch D’Arrigo.

“Sometimes they come to train in the same slot. Also when we traveled in December, for the US Open, Dressel, Lochte also travelled in the same team, stayed in the same hotel and we talked a few times over breakfast or warm-up,” he says.

Advait was scheduled to go compete in the Canadian Olympic trials and had aimed at an Indianapolis meet – TYR Pro Series meet on May 20, where he planned to race for achieving the A cut, though both got cancelled. The biggest change forced upon him is in food. “There’s pork that’s difficult,” he crinkles his nose adding it’s extremely necessary.

“Something I hate but also my meal timings: in India dinner was at 8, here it’s 5 pm. Lunch is 11.30, not 1, everything revolving around training times.”

The Indian might’ve landed in Florida in what was perhaps the most dramatic season for the UF. “They were 7 times champions in a row, and there was chatter that they might not win the 8th, but I saw how hard the team trained and how gruelling it got. We won the 8th with some 1-2-3 sweeps and a bunch of records. They are calling it one of the greatest seasons for UF swimming,” he says.

Then Covid-19 struck. But Advait Page is determined to head back when life feels normal and a splash in the water isn’t something to celebrate. “It’s tough, but we are all in it together,” he says.

Sourav Ganguly is BCCI’s man in ICC board meeting

India free from polio, then why is govt launching drive...

TCS falls over 2% after Q3 earnings

Serena Williams to return to action in Kentucky next month

What To Watch On Streaming If You Like Will Smith

In a move that highlights how open the American IPO window may be at the moment,...